Find out your chances of getting into Nobel School (The)

Admission rules for Nobel School (The)

This is a foundation mixed-sex secondary school.

Rule 2: Children for whom it can be demonstrated that they have a particular medical or social need to go to the school.

Rule 3: Children who have a sibling at the school at the time of application, unless the sibling is in the last year of the normal age-range of the school.

Rule 5: Children who live in the priority area for whom Nobel is their nearest Hertfordshire maintained school or academy that is non-faith, coeducational and non-partially selective. Currently the priority area is defined as: Aston, Benington, Datchworth, Graveley, Great Ashby, Knebworth, Stevenage and Walkern.

Rule 6: Children who live in the priority area who live closest to the school.

Rule 7: Children living outside the priority area on the basis of distance, with those living closest to the school given priority.

Tiebreaks: If more children qualify for a school place under a particular rule than there are places available, then the next rule will be applied to those children. A tiebreak will also be used if 2 applications have addresses that measure the same distance from a school. For example, if 2 applications had identical home to school distance measurements, a random tiebreak would be used to decide which applicant is offered a place

If you want to appeal for Nobel School (The) we suggest you buy our School Appeals Guide, and read our school appeal tips. 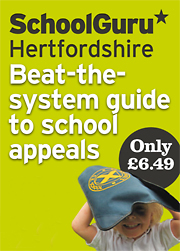