We're teaming up with local property experts to tell you all you need to know about schools, properties and everything else in Hertfordshire's favourite towns. And we've started in St Albans. Cmon, get your coat, let's go look... So, you've got your heart set on a school... and the Admission Calculator says: 'no way, Jose?' Or you're planning to relocate to Hertfordshire, in search of the good life, but need a little help finding it? We've teamed up with PropertyGuru Seanne Ryder from Homes and Herts to answer your questions on house hunting in Herts...

Parent: So, I'm thinking of relocating to Hertfordshire. Tell me where to move to!
PropertyGuru: Ah, well that depends on what you're looking for. Tell me more about your situation...

Parent: Naturally, I want great schools...
PropertyGuru: Naturally... that's why most parents move here. There are fantastic state schools in urban areas such as St Albans, Harpenden, Hertford, Watford and Bishop's Stortford. You can also find small village schools that are highly rated by Ofsted. Then there are the selective secondary schools, such as Parmiter's (start tutoring your baby now!). Plus, there's a range of faith schools and high performing independent schools (eg Haberdashers Aske's in Elstree).

Parent: I work in London, so where's good for commuters?
PropertyGuru: Rail, road, air or sea? You name it, we've got it covered!
Rail: There are at least ten mainline stations in Hertfordshire including Harpenden, Hitchin, St Albans, Welwyn Garden City, Watford, Hemel Hempstead, Potters Bar, Bishops Stortford and Stevenage. These provide direct trains to Kings Cross, St Pancras and Euston. There are also a multitude of small and medium sized stations scattered throughout the country. You shouldnt have to travel more than 15 minutes to a station.
Road: The A1, M1, A10, M11 and M25 run through Hertford. Many locals drive into London on a daily basis.
Air: Stansted, Luton and Heathrow are our local airports. Or snap up a pied a terre with helipad...
Sea: Harwich is 90 minute drive from the east of the county, whilst trains from St. Pancras travel directly to The Channel via Eurostar links.

Parent: I'd love to live in a buzzy area, with decent shops, restaurants and bars. Where would you suggest?
PropertyGuru: St Albans, Watford and Hemel Hempstead have plenty of shops and bars, to suit all budgets and tastes. On a smaller scale, Bishop's Stortford, Tring, Harpenden and Hitchin are fantastically well furnished with local shops and businesses. If you prefer a local feel to your shopping expeditions, the market towns of Hertford, Ware, Hitchin, Waltham Cross and Royston offer farmers markets and locally owned shops. We are also lucky enough to have a myriad of thriving villages across the county; many of which can boast a butcher, a baker, a newsagent, a village store and the obligatory pub or two.
Most places are 90 minutes or less from Central London, Cambridge, Bicester Village and Milton Keynes.

Parent: Perfect. Id also like to be near a park or the countryside...?
PropertyGuru: We are fortunate to have beautiful, and largely undiscovered, countryside in Hertfordshire. Childrens play areas and parks are plentiful. We also have a pleasingly large number of golf courses, public access woodlands and places of interest for all the family. For example, there is a famous (and rather fabulous) Scout Camp in Cuffley and we are lucky enough to have one of the few remaining lidos in the UK, Priory Lido at Ware.

To the east of the country is Lee Valley Regional Park. This area offers 26 miles of open water, rivers and canals as well as walking trails and glorious cycle routes taking you from idyllic countryside straight to the heart of London. And if that doesnt sound impressive enough, the area has the Olympic seal of approval. A series of canoeing events will be held in the Valley at a custom-built white water centre.

For those who prefer to keep their feet on dry land, The Lee Valley also has some of the best habitat for birding in the UK. To the north of the county sits the ancient and enchanting Hatfield Forest, whilst to the West are the stunning Chiltern Hills. The central area of the county is predominantly farming land or wooded and is dotted with attractive villages. The county also hosts a number of large-scale concerts, festivals and events, at venues including Hatfield House, Audley End, Knebworth, Pendley Manor and Standon.

Parent: Ok, I'm sold! Hertfordshire rocks! But my budget's 350k. What will that get me around here?
PropertyGuru: Based on Herts average Land Registry prices, a £350k budget would secure a decent semi-detached 3-bedroom property in most areas. In some places, you could snap up a detached house. Our experience of the market indicates that a budget of £350k will afford a terraced period property in some of the more sought after areas such as Hertford, Stortford; or a large new build in areas such as Stevenage, Hatfield, Royston and Letchworth. In the pricier areas such as St Albans, Brookmans Park, Harpenden and Berkhamsted, you will need to be a smart buyer to get a family home near a good school for under £350k. Proximity to schools, large gardens and parking are all at a premium and the prices reflect this. Dont be disheartened though, Hertfordshire has a wide range of property styles available from medieval cottages to Georgian terraces to new build mansions. It is worth being open minded, because there are some gems out there. You just have to look a little harder to find them

So, you're coming to Hertfordshire? Want to check out the local schools? Then our list of schools by town, will come in handy... 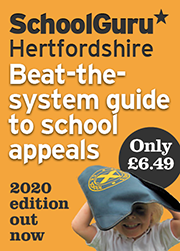